The case for Covid boosters – The Big Story News


Complacency has been as much of an obstacle in our fight against Covid as the virus itself. First, it was pandemic fatigue that made people shed mask and social distancing protocols, then it was vaccine hesitancy, now it’s both. The seemingly milder Omicron variant and sub-variants, as well as the fortification of two doses, and possibly a booster dose, of the Covid vaccine has lulled people into believing that Covid is behind them. But if there’s one thing the virus has taught us—and brutally in the case of Delta—it is not to take it for granted.

Complacency has been as much of an obstacle in our fight against Covid as the virus itself. First, it was pandemic fatigue that made people shed mask and social distancing protocols, then it was vaccine hesitancy, now it’s both. The seemingly milder Omicron variant and sub-variants, as well as the fortification of two doses, and possibly a booster dose, of the Covid vaccine has lulled people into believing that Covid is behind them. But if there’s one thing the virus has taught us—and brutally in the case of Delta—it is not to take it for granted.

Indeed, India is seeing a rise in Covid cases again, as the country reported a 45 per cent single-day rise in new cases with 17,073 fresh infections on June 27. In the week ending June 26, India recorded 100,000 new cases and 100 deaths, the highest in three months. Kerala and Maharashtra, which seem to be leading this surge, have well over 20,000 active cases each. Delhi, Karnataka and Tamil Nadu remain other states of concern. Delhi is seeing a sustained increase, with daily cases crossing the 1,000- mark since June 14. The capital also had a high positivity rate of 7.8 per cent as on June 27.

AIIMS chief Dr Randeep Guleria is categorical when he says, “Covid is still very much around and non-adherence to Covid-appropriate behaviour as well as a low uptake of booster doses have contributed to the spread. We need to revert to mask usage, adopting one as a second skin.” 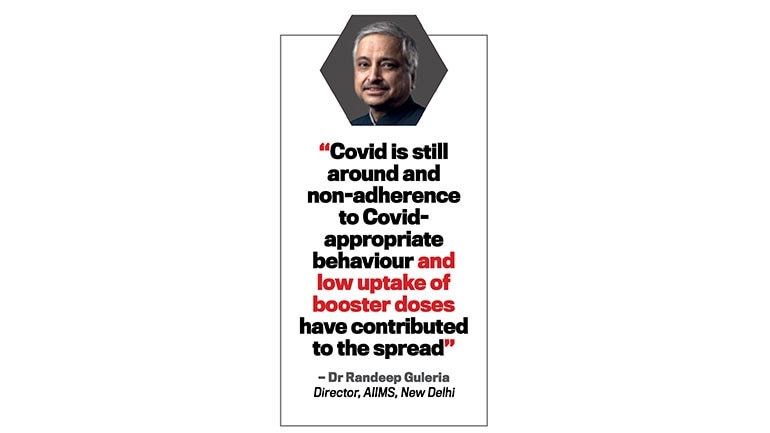 What concerns experts is the unrestricted spread of the virus, and the possibility that it may spawn a more contagious, and possibly deadlier, mutation. Of the five major variants— Alpha, Beta, Gamma, Delta and Omi- cron—of Covid so far, Omicron has resulted in the least severe infection and symptoms but it has also been the most transmissible. “One reason we could have more sub-variants of Omicron is the way in which it has spread and continues to spread, giving it opportunities to mutate,” says Dr Rakesh Mishra of the Tata Institute for Genetics and Society in Bengaluru.

Indeed, the latest sub-variants of Omicron—BA.4 and BA.5—are already being held responsible for the current spike. First spotted in South Africa in April and linked to the nation’s subsequent Covid wave, they have been detected in dozens of countries since and account for nearly 25 per cent of all cases in the US. In India, Maharashtra has recorded the highest number of cases—49—of the two variants. According to NCDC or National Centre for Disease Control estimates, BA.4 and BA.5 grew from causing about one per cent of new Covid cases in India in the first week of May to causing 22 per cent of new cases in the week ending June 11.

While the disease they cause is mild, the sub-variants have unique mutations, including changes la- belled L452R and F486V in its spike protein, that make it more infectious and capable of overcoming immune responses from previous infections and vaccines. And that is where the new concern lies—how effective is the current lot of vaccines against new variants and if a booster dose really helps. Dr N.K. Arora, head of the Covid-19 working group at the National Technical Advisory Group on Immunisation (NTAGI), is unequivocal in his advice: “Besides wearing masks and social distancing, we need to take booster shots, which build immunity and reduce risk of severe disease.”

So far, less than five per cent adults in India have taken a booster dose. Other than the confusion about which booster to take, many are wondering if it is worth taking at all. Dr Pavithra Venkatagopalan, director, Covid task force, Rotary Club of Madras Next Gen, cannot understand it. “If people don’t think twice before taking the chickenpox vaccine, why should there be concern over Covid shots?” she asks. LNJP medical director Suresh Kumar is emphatic. “Boosters are essential to replenish your immunity against Covid-19,” he says. Dr T. Chandrashekhar, internal medicine specialist at Fortis Hospital, Vashi, Mumbai, says that for those with comorbidities or the elderly, taking a booster is essential.

Many of the doubts seem to stem from studies that indicate vaccines to be largely ineffective against the new Omicron sub-variants. A new study by the Harvard Medical School claims that BA.4 and BA.5 appear to escape antibody responses among both those who have had an infection and those who have been fully vaccinated and boosted. The study found that the neutralising antibody levels were lower by a factor of 6.4 against BA.1, 7 against BA.2, 14.1 against BA.2.12.1 and 21 against BA.4 or BA.5. However, it did note that vaccines still provide protection against severe Covid and death. Studies have shown that even those with hybrid immunity—a result of vaccination and previous infection with Omicron—produce anti- bodies that struggle to stall BA.4 and BA.5. On June 28, its Food and Drug Administration or FDA recommended that the US update its boosters by the end of the year to target Omicron in specific. Omicron is not only dominating globally but seems to be evolving to escape immunity from vaccines that previous variants had not had. Pfizer and Moderna have been working on Omicron-targeted vaccines. However, chances of such a vaccine being available globally in sufficient doses remains doubtful and by the time such a vaccine does reach the masses, Covid could well have mutated again.

So far, India has not allowed a mix and match of vaccines, one reason that has deterred many, as studies seem to suggest a “heterologous” (a booster shot that uses a different vaccine from the ones previously taken) regime to be more effective.

A 2022 study by CMC Vellore found that a Covishield booster after a two-dose Covaxin immunisation gave the highest antibody response, compared with a Covaxin booster following two Covishield shots. Antibodies shoot up six times when Covishield is administered as a booster (third dose) to those vaccinated with two doses of Covaxin. The antibody response, though, isn’t as high for a Covaxin booster for those who have taken two doses of Covishield. However, as Dr Rohan Aurangabad- wala, pulmonologist, Apollo Hospitals, Navi Mumbai, says, “The main point is that one needs to be vaccinated. Waiting for a different vaccine as a booster should not stop one from protecting oneself in the present.”

Many, however, are biding their time before a mix-and-match option is available. Pune-based engineer Anurag Bhatia says he is hoping one of the mRNA vaccines is available for the booster as he has read about their efficacy online. His wait may well have ended earlier this month when vaccine manufacturer Biological E’s protein sub-unit Covid-19 vaccine Corbevax was approved by the DCGI (Drugs Controller General of India) to be the country’s first heterologous booster in adults. According to studies, after a booster dose of Corbevax, neutralising antibodies against Omicron were found in 91 per cent of those who had received Covishield and in 75 per cent of those who had received Covaxin. But despite the approval, the vaccine is awaiting clearance from NTAGI, the final body that evaluates data on vaccines. Vaccines, say doctors, remain essential to keep away death and severe Covid complications. “There is a sense that Covid is no longer harmful,” says Dr Sushila Kataria, internal medicine specialist at Medanta, Gurugram. “Many aren’t considering the symptoms of Long Covid—fatigue, brain fog, breathlessness—that can last months.” The present surge may not be claiming lives, but it could well be leaving behind the burden of Long Covid. Experts hope that it also doesn’t leave behind a new, deadlier, variant of concern.

‘The Phantom of the Opera’ extends Broadway run due to demand