Canine economy: This dog is having its day – The Big Story News

An outside view of the Supreme Court. — SC websiteISLAMABAD: The top court on Wednesday directed the government...
Read more


In canine lineages, one can follow traces of human endeavour, as packs of dogs followed groups of people into new lands. A similar pattern has had some surprising consequences in a parched corner of the Deccan plateau where a distinctive breed of dogs has enlivened a struggling rural economy. A keen look framed by a narrow muzzle, a proud, tall bearing supported by spindly, strong legs, a stomach that curves inward in an ‘s’, and a latent fierceness it’s too glad to exhibit—you just cannot miss a Pashmi. In its menacing growl, owners read an ironcast guarantee.

At Janwal village in Maharashtra’s Latur district, the stone-walled house of farmer Tanaji Pawar is stacked with sacks of soyabean and jowar. With the first spells of rain, sowing for the kharif season will start. But as farmers across India worry if inflation could force up prices of fertilisers and pesticides, Pawar isn’t that concerned about his ‘cash in hand’ for such farming essentials. ‘Malhar’, his pet dog of the Pashmi breed, took care of that. 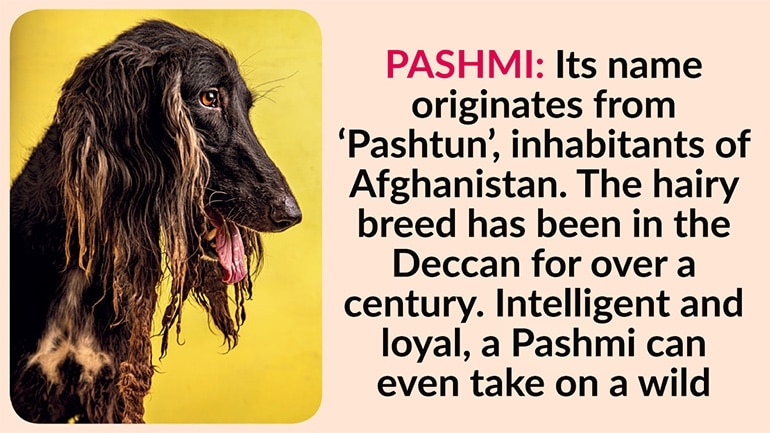 Pawar charges Rs 5,000 from villagers who bring their female Pashmis for breeding with Malhar. As a purebred stud, Malhar contributes Rs 2-2.5 lakh to Pawar’s household annually. The breeding season starts from Dussehra and lasts till Diwali. “The money I earn from breeding covers almost 25 per cent of farming expenses, such as labour charges. That has reduced my dependency on bank loans,” says Pawar, who is in his 40s, heads a family of four and owns 45 acres of farm land.

Similar tales of dog-breeding entrepreneurship among some 50 families in Janwal and the nearby village of Mhalangi are rewriting Latur’s reputation as a bone-dry district—in 2016, it hit national headlines when drinking water had to be transported there in railway wagons from Sangli, over 300 kilometres away. (Water-hungry sugarcane, however, has made a comeback on the strength of two normal monsoons.)

Janwal and its surrounding areas are known for the breeding of the Pashmi as well as the Caravan dog. The latter looks much like the Pashmi—the same long muzzle, the rippling muscles in the same lean body, but without the Pashmi’s lightly feathered coat. Innate hunters and guard dogs, both are ‘sight hounds’—dogs who hunt by sight rather than by scent. Caravans, they say, are as fast as light. The magnificent spectacle of these lithe creatures loping through the tawny rural landscape now draws dog lovers from across the country. It has changed the financial dynamics of this dusty village of 10,000 souls.

Yet the form of the trade, now that it’s moving out of the few villages where it was formerly confined, has raised concerns over the well-being of the breeds—always in danger of their purity and quality being compromised. As the rest of India takes note and hankers for a prized puppy, it’s time for the government and locals to do more.

“Pashmi is an all-weather dog,” says Pawar, whose family has been keeping the breed for more than 80 years. “As it has fur, it can survive in all three seasons.” Pawar’s ducks and hens roam freely, unafraid, and he does not lock the house whenever he steps out, as Malhar does not let anyone in. “Pashmis like to be handled only by their masters. Its bark is so loud and its posture so aggressive that a stranger would be deterred if it is around.”

A puppy is born 62 days after mating; breeders keep the puppy for two months before selling it. “People come to us for advanced booking of a puppy. Every year, there is a waiting period,” says Pawar. A puppy is sold at anywhere from Rs 12,000 to Rs 15,000. Most buyers are from Mumbai, Delhi, Gujarat, Telangana and Andhra Pradesh. Some bureaucrats and politicians are regular buyers. On an average, they spend Rs 50,000 on a puppy, including price and transportation cost. “I had sold a puppy to a US resident two years ago. She came to Janwal after someone told her about the Pashmi breed.” Tejas, the younger son of Maharashtra chief minister Uddhav Thackeray, too, had bought a black Pashmi from Janwal forRs 23,000 eight months ago. Often, Pawar has not charged money for breeding. Instead, he takes a puppy to sell or gift it.

Farmer Ranjit Patil, owner of three Pashmi dogs, two males and one female, says its simple eating habits and clean nature is a reason why the breed is in demand. His favourite of the trio is Shera. “These dogs eat roti, eggs and drink milk like us,” he says. “They’ll never defecate in the house.” Patil, too, does not charge for breed­ing, only accepts a puppy from those who seek his stud’s services. “The Pashmis don’t suffer from dehydra­tion. They don’t even need vaccination as they have strong natural immunity,” he says, adding to the list of its qualities.

Jagannath Pawar, a grocery shop owner, also takes great pride in his Caravan, whom he calls Johnson. “Once it sets its eyes on his prey, it would hunt it, come what may,” says a visibly proud Jagannath. Rabbit and deer are its favourite quarry. “The Caravan is more intelligent than a Labrador. It grabs a rabbit in its sharp teeth and retrieves it without mauling the game,” he says. Jagannath, too, charges between Rs 3,000 and Rs 5,000 for breeding in the three-month-long breeding season. “One Caravan pup is sold at Rs 15-20,000 on an average. I use this money for running the shop. I don’t need to take loans,” he adds. (From left) Dolly, a Pashmi, and Leo, Jacky and Johnson, all Caravans, with their owners in Janwal; Photo by Bandeep Singh

The Pashmis are an Afghan breed. Many Pashtuns and Pashtun-related Rohillas, who came to India to work with the British, brought these dogs along with them in the late 19th century. Villagers in Janwal relate handed down tales about how the dogs first wandered into their village when the British were constructing a railway line between Parli (around 60 km away) and Hyderabad. Latur was a part of Hyderabad State before Independence. As the Pashtuns left for Hyderabad to take up service with the Nizam, they left the dogs behind. Ever since, the villagers have adopted them as their own.

The Caravans were brought to India from the US by Nanasaheb Ghorpade, ruler of the erstwhile Mudhol state, in the early 1900s. They are also known as Mudhol hounds. The breed of Caravan found in Janwal is also known as Bangadi Caravan, as its sleek head can pass through a bangle—or so the story goes.

In those days, the dogs were mainly used for hunting and for protection from wild animals. Latur district was once a haven for wildlife, with a large population of tigers—inevitably regarded as a menace by the local cattle warders. The Pashmis and Caravans were apparently regarded as a godsend by the villagers at the time. Legend has it that their unbridled aggression could keep even tigers at bay.

But all this was local lore and practice. The Pashmi and the Caravan caught the eyes of dog lovers in a rural dog show organised by the Hyderabad-based Ethnic Indica Canine Society, which encourages Indian breeds, at Janwal in 2002. The Pashmis were the stars of the show. Ever since then, the Pashmis have been a firm favourite. However, ominous dark clouds hover over the scene. The government’s apathy and the villagers’ quest for more money have put the breeds in danger of extinction, say experts. Pramod Salunkhe, a dog breeder and former president of the Latur Canine Club, says inbreeding—over-reliance on a few pri­zed studs like Pawar’s Malhar—has caused the quality of these dogs to dip. “The Caravan is known for hunting. However, the villagers promoted Punjab Greyhounds (often reared for racing) over Caravans as they are faster,” he says. “If not taken care of, the Pashmi and the Caravan breeds will soon become extinct.”

The villagers also do not maintain a record of those buying their dogs, so there is no reliable database on which to establish pedigree. The Chennai-based Kennel Club of India (KCI) maintains records of each of the indigenous breeds. The KCI panel judges several breeds of dogs and issues certificates, authenticating their genuineness and importance. “We are trying for a certificate for the Pashmi and the Caravan from KCI. That will help us in branding them in a more efficient way,” says Salunkhe. 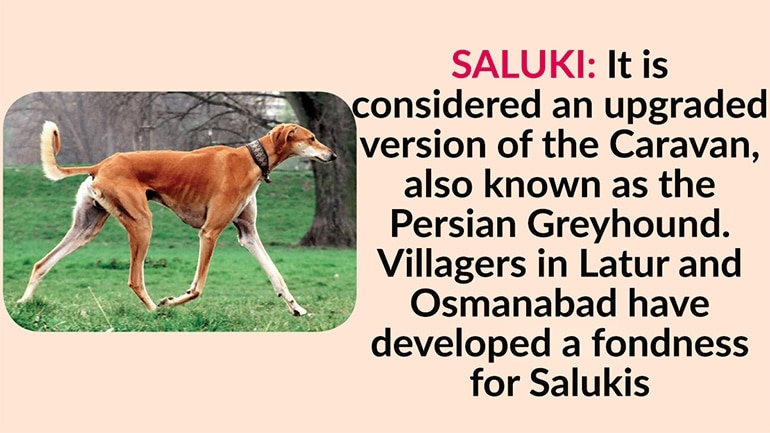 Under then chief minister Vilasrao Deshmukh, who represented Latur in the Maharashtra assembly, the government had allotted a two-acre plot on the outskirts of Latur city for setting up a breeding centre for Pashmis and Caravans in 2008. It never came up. “There is a need for scientific research and adoption of ways to preserve these rare breeds. Their reducing numbers are our collective failure,” says Salunkhe.

Finally, wisdom dawned in 2020, when the Maharashtra government initiated a genetic study of native species of cattle and domesticated animals in the Marathwada region, which includes Latur. The idea was to study the genetic traits of Pashmis and Caravans, Osmanabad goats, Red Kandhari cows and Deoni bulls. Unfortunately, the project now seems to be foundering because of inadequate funding.

Maintaining the ‘quality’ of the Pashmi breed worries Tanaji Pawar too, but only to the extent of his immediate needs. Pawar has to identify a quality male Pashmi once Malhar gets older, to keep his profitable breeding business going. “It is nine years old now, but I need to plan for the future. There are very few male Pashmis left in the village,” he says. It will let loose the dogs of war of a different kind.

An outside view of the Supreme Court. — SC websiteISLAMABAD: The top court on Wednesday directed the government...
Read more
Turkey

Drake Has Adorable Conversation With His “Cash” Son Adonis

Heard previously testified that Depp hit her, and any time she used force, it was in reaction to him. Depp on Wednesday said...
Read more

On Tuesday, a March recorded deposition of Walter Hamada, President of DC Films, which is a division of Warner Bros., was played for...
Read more

Oprah Winfrey paid DeGeneres a visit on Tuesday. Winfrey said it made her emotional to think about the final days of her own...
Read more
- Advertisement -