In 2014-15, engineering institutions approved by the All India Council for Technical Education (AICTE) had around 3.2 million seats on offer—the highest ever. From that peak, the total number of seats for undergraduate, postgraduate and diploma courses has been plummeting, down to a decadal low of around 2.32 million in 2020-21. To AICTE chairman Anil Dattatraya Sahasrabudhe, the crisis in engineering education in the country is also an opportunity. “The number of engineering institutions had grown exponentially, leading to over-capacity and a high number of vacant seats. The recent trend of engineering colleges shutting down or reducing seats will lead to consolidation and ensure sustained quality in the years to come,” says Sahasrabudhe, now in his seventh year as India’s technical education regulator.

In 2014-15, engineering institutions approved by the All India Council for Technical Education (AICTE) had around 3.2 million seats on offer—the highest ever. From that peak, the total number of seats for undergraduate, postgraduate and diploma courses has been plummeting, down to a decadal low of around 2.32 million in 2020-21. To AICTE chairman Anil Dattatraya Sahasrabudhe, the crisis in engineering education in the country is also an opportunity. “The number of engineering institutions had grown exponentially, leading to over-capacity and a high number of vacant seats. The recent trend of engineering colleges shutting down or reducing seats will lead to consolidation and ensure sustained quality in the years to come,” says Sahasrabudhe, now in his seventh year as India’s technical education regulator. In 2019-20, the AICTE approved 153 new engineering institutions while closing down 53 others. Even before the Covid-induced disruption in 2020-21, at least 50 engineering colleges have shut shop each academic year since 2015-16. This year, 63 colleges have got the AICTE’s nod to stop operations (see Open and Shut). The closure of these colleges and reduced intakes of students will lower the number of seats by 146,000.

In 2020, the AICTE decided that no new engineering colleges will be permitted till 2022 and the creation of new capacity will be reviewed every two years. This was in keeping with the recommendations of a government committee headed by B.V.R. Mohan Reddy, chairman of the Board of Governors of IIT-Hyderabad. The panel also suggested that institutes consider converting seats in traditional engineering streams, such as mechanical, electrical, civil and electronics, to emerging technologies. Now, the AICTE is giving clearance for new engineering colleges only in emerging disciplines or those coming up in the backward regions. It has permitted states to introduce BTech courses in “highly employable vocational disciplines”. 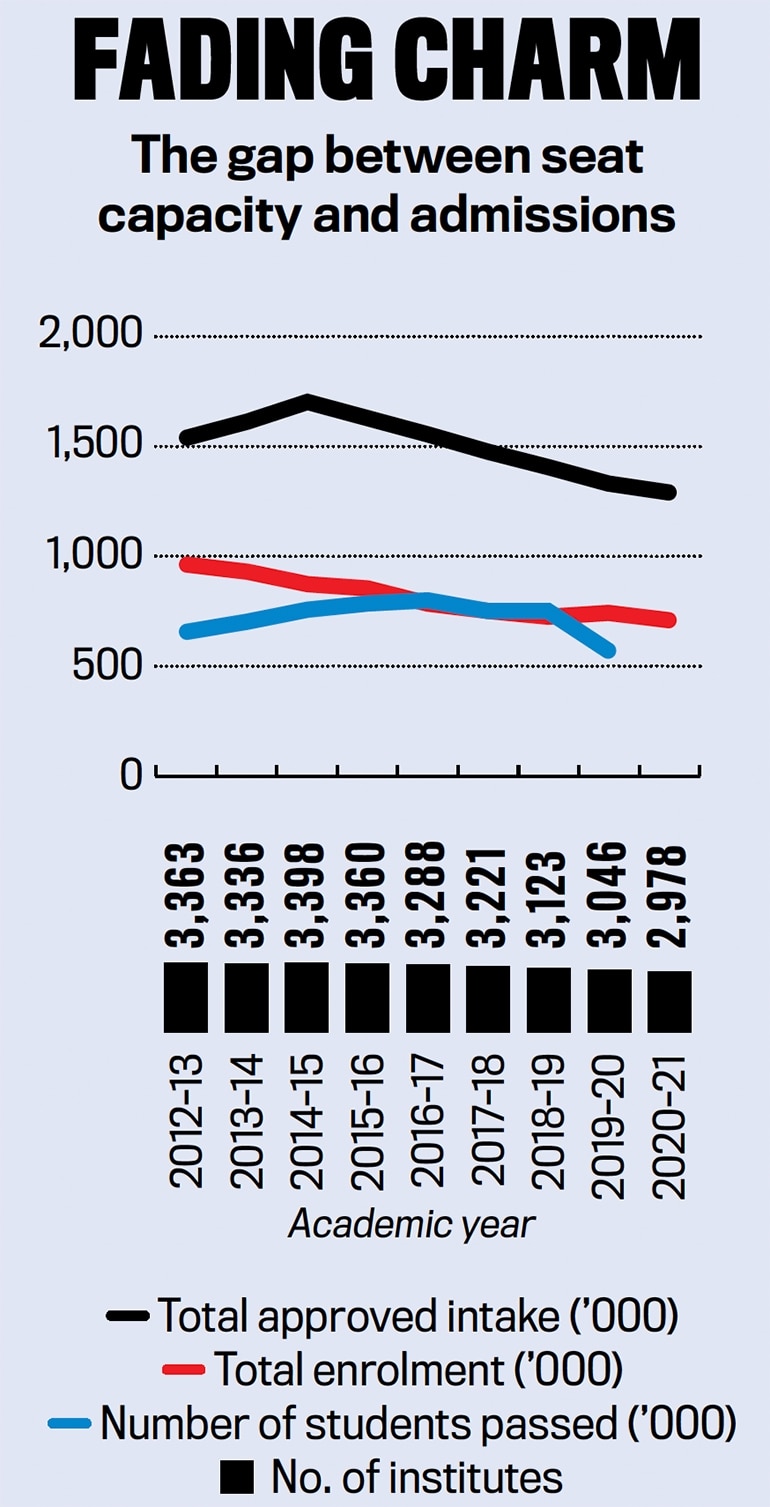 Engineering, by one estimate, accounts for around 80 per cent of technical education seats in India, but has had fewer takers over the years. The number of engineering seats has reduced by 563,000 since 2019. Of these, 98,476 seats were cancelled by the AICTE and the remainder by the colleges themselves after taking into account the current vacant seats and the expected fall in demand in the future. The total approved student intake has fallen from 1.54 million (in 3,363 institutions) in 2012-13 to 1.28 million (in 2,978 institutions) in 2020-21. The total enrolment in 2020-21 stood at 706,533 (see Fading Charm).

Sahasrabudhe says the AICTE is focused on stemming the slide in the quality of engineering education and improving the employability of graduates. A 2019 study by Aspiring Minds, an employability assessment firm, suggested that around 80 per cent of Indian engineering graduates were unfit for jobs in the knowledge economy. Sahasrabudhe cites several reasons for this: regulatory gaps that have allowed corruption to facilitate the bypassing of qualification norms for recognition and accreditation of colleges, for example; infrastructure gaps in institutions; poor quality of teachers and lack of industry linkages. The AICTE is battling these issues through examination reforms, mandatory internships and induction programmes for students, continuous revision of the curriculum and training of teachers.

Engineering colleges face their own set of challenges. They are fast realising that students are losing interest in the traditional engineering subjects. At the same time, new norms and a tighter vigil by the AICTE have meant that many colleges are unable to launch in-demand courses, such as in machine learning and artificial intelligence (AI). “The digital world has created a great demand for skilled individuals in data science, AI and machine learning. But we are unable to cater to their needs as the AICTE decided against allowing new courses in colleges that could not fill 50 per cent of their seats in the last academic year,” says P. Selvaraj, secretary, Consortium of Self-Financing Professional, Arts and Science Colleges in Tamil Nadu. The state has 554 engineering colleges.

The quality of engineering education also suffered as the mushrooming colleges did not hire properly trained and well-paid faculty. The pandemic prompted many private colleges to lay off teachers, and their subjects were passed on to the remaining faculty members even if they lacked the requisite qualification. Few engineering managements are willing to rehire teachers ahead of the new academic year, starting October 1, since online education has largely done away with the need for practical classes.

The AICTE has warned engineering colleges of punitive action if they do not stop the sackings and ramp up faculty strength. It has asked colleges not to insist on payment of the entire year’s fees at one go during the pandemic and collect it from students in three or four equal instalments till the time normalcy is restored. It has also recommended that institutions allow students from nearby colleges, without internet bandwidth, to access their facilities. Attendance regulations may also be relaxed in light of the Covid lockdowns and poor internet availability in the remote areas.

Drastic situations call for drastic measures—a recent circular from the AICTE asked colleges to allow students with BE/ BTech degrees lateral entry into a BE/ BTech degree in another engineering discipline. It is a second degree for engineering graduates who want to switch their core disciplines. The council says students may complete the additional degree in two or three years “without compromising on the credit requirements in the core discipline and attainment of learning outcomes of the new programme”. Universities have been advised to introduce necessary provisions in their statutes.

College managements, though, are sceptical. They feel lateral entry is a recipe for confusion and will not benefit students. Some wonder if the decision is intended to fill up vacant seats in colleges. “It’s a strange policy. Why would someone take a double BTech degree? The National Education Policy (NEP) 2020 provides for making BTech interdisciplinary. Instead of allowing two engineering degrees at the undergraduate level, which may lead to artificially hyped demand, the existing undergraduate degrees should be made more interdisciplinary, and comprehensive postgraduate programmes, such as in systems analysis & design, should be encouraged,” feels S. Vaidhyasubramaniam, vice-chancellor, SASTRA Deemed University, Thanjavur.

Vaidhyasubramaniam suggests introducing a generic postgraduate engineering degree that is undergraduate-neutral, such as in systems design and management, project management or business intelligence. This, he feels, will offer better career prospects given how businesses are evolving. Besides, given the shorter two-year time period for the second degree (an MTech course), it will add more value than a second BTech degree.

With technology evolving fast, companies favour engineers with multidisciplinary skills. “Robotics and automation are a combination of mechanical, electrical, electronics and computer science engineering. The internet of things is both hardware and software. Digital manufacturing involves mechanical, electronics and computing knowledge while 3D printing is increasingly being used in medicine,” says K. Manivannan, director, industry and academia relations, Vinayaka Mission’s Research Foundation, a deemed-to-be university in Salem, TN. Citing an example, he adds: “ICMR (Indian Council of Medical Research) has called for proposals on management and analysis of Covid-19 testing data of 480 million individuals by September 10. There is a need for professionals to integrate the data and do predictive analysis and forecast, all of which requires the use of AI and data intelligence. Skills from across verticals need to be incorporated to provide a solution.”

Sahasrabudhe is clear that engineering education needs a transformation if it is to stay industry-relevant and generate jobs. “The AICTE’s efforts in the past six years have been to play the role of both a regulator and facilitator,” he says. One of the focal areas is periodic revision of the curriculum. “To create a robust academic system, the AICTE has been preparing a model curriculum every three to four years by taking inputs from both institutions of national importance and industry. At the same time, universities have the autonomy to make choices depending on region-specific factors. In many courses, curriculum revision needs to be an annual process,” says Sahasrabudhe.

Conforming to NEP 2020, the AICTE is prioritising the task of facilitating engineering courses in regional languages. It has created an AI tool for translating course material into 12 languages. “The move empowers those who did their school education in one or the other of these regional languages. It has been established worldwide that those who learn in their mother tongue have a better thinking process and assimilate faster,” says Sahasrabudhe.

From the 2021-22 session, 13 colleges will begin offering mechanical, civil, computer science and IT engineering courses in Bengali, Tamil, Telugu, Marathi and Hindi. The technical terms will remain in English. Teachers, translators and textbooks will be required for the exercise. In February, a pan-India survey by the AICTE among 83,000 engineering students found 44 per cent preferring their mother tongue as the medium of learning, with Tamil topping the list. The survey was limited to colleges approved by the council. 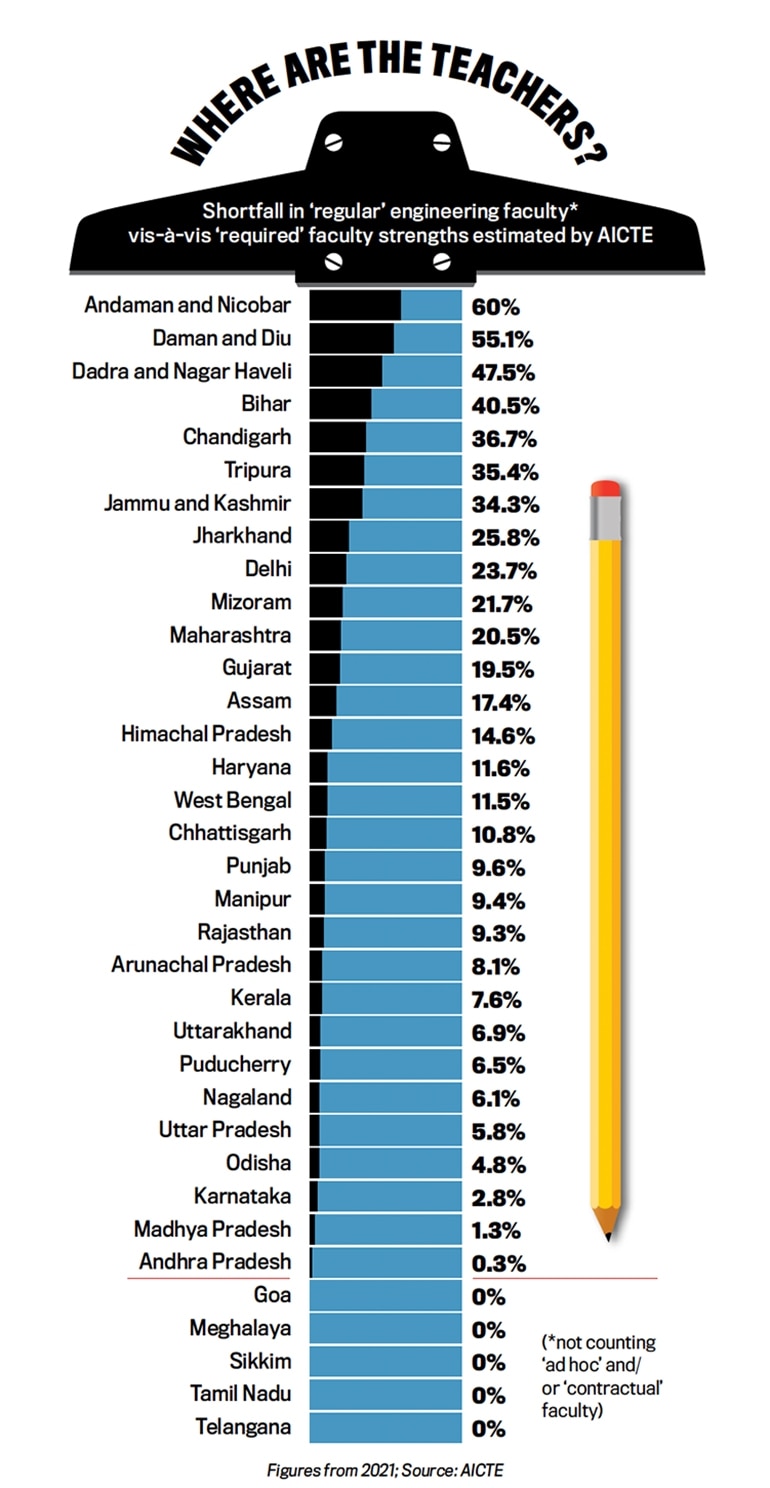 The AICTE has been trying to widen students’ industry exposure through internships, making them mandatory in all engineering colleges under its purview. An AI-based internship platform set up by the council links students with companies offering internships. “With such interventions and internships gradually becoming popular among students and companies, it wouldn’t be ambitious to estimate that 200,000-300,000 new jobs will be created every year,” says B.V.R. Mohan Reddy, who is also founder and executive chairman of technology firm Cyient. “Barely 300,000 engineering students manage to get decent jobs every year. Internships have the potential to almost double that figure. And the numbers will only keep growing.”

Internships are also expected to help bridge the skills gap. The 2019 employability survey by Aspiring Minds found that 95 per cent of Indian engineers couldn’t code correctly. This is particularly worrying since a huge chunk of them work in the IT sector.

Perhaps the biggest challenge for AICTE is to go beyond the piecemeal solutions it has relied upon in the past to improve engineering education in the short and medium term. Companies now want engineering researchers and graduates with an ability to grasp complex technological processes and provide solutions. It is imperative, then, that engineering education in India aligns with this global trend. As former AICTE chairman S.S. Mantha says, “To achieve this, we need a truly autonomous quality assurance body that keeps the government at an arm’s length and is manned by eminent persons from industry and academia. As the country transforms into a digital economy, the future is uncertain and one is likely to encounter setbacks no matter how much one prepares or plans.” The right training will help.