Himachal Pradesh: Over 370 people rescued after being stranded in Lahaul-Spiti

Over 370 people were rescued from Lahaul-Spiti in Himachal Pradesh after they were stranded following a cloudburst over Tojing Nullah on Tuesday. 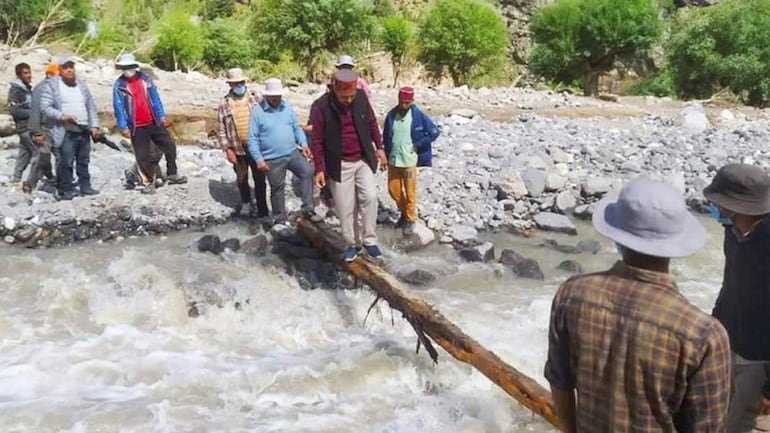 A rescue operation being carried out for the people stranded after a cloudburst in Himachal Pradesh’s Lahaul-Spiti. (Photo: PTI)

Over 370 people, who were stranded in Himachal Pradesh’s Lahaul-Spiti district due to heavy rains and landslides, have been rescued, a state disaster management official said on Sunday.

They were marooned in areas under the Udaipur Sub-Division of the district.

He said 194 people were rescued from Udaipur, Fuda, Trilokinath and Jahlman on Sunday.

While 19 persons were airlifted, 175 were evacuated by road, Mokhta added.

Earlier on Saturday, 178 persons were rescued.

Thus, a total of 372 persons were rescued from the Udaipur Sub-Division in two days, the SDMA director said.

They were stranded after a cloudburst over the Tojing Nullah on Tuesday, he added.

Chief Minister Jai Ram Thakur had on Saturday visited flood-affected areas of the Lahaul Valley to take stock of the situation due to flooding in the Tojing Nallah on July 27.

Thakur had also inspected the areas with teams of the district administration, Border Roads Organisation and the Indo-Tibetan Border Police.

India vs South Africa: Deepak Chahar likely to be ruled out of last 2 ODIs due to injury

Deepak Chahar is likely to be ruled out of the remainder of the ODI series between India and South Africa after suffering an...
Read more

Manchester City were fined 260,000 pounds ($288,808) by the Football Association (FA) on Friday for their fans' behaviour after they celebrated last season's...
Read more

Chelsea manager Graham Potter on first month in charge: We have made little bit of progress

Chelsea manager Graham Potter said that his team has made a little bit of progress since he took over the Blues. Chelsea are...
Read more