Paradise lost: Bali’s beaches are empty with hospitals at breaking point and suffering oxygen shortages due to Covid – as Aussies living on the resort island say locals are desperate for tourists to return

Two Australians who have long called Bali home have revealed how the island paradise is at breaking point due to Covid-19.

Chef Dean Keddell and Margaret Barry, who runs the Bali Children Foundation, both fear the nation may never fully recover from the pandemic.

Tourism numbers are at an all-time low, beaches and bars remain deserted and the usually bustling streets in places such as Kuta and Legian look like ghost towns.

The sad development comes as Indonesia reports more than 1,000 Covid cases each day and more than 86,000 deaths since the pandemic started in 2020.

Overcrowded hospitals are also struggling to cope with the surging flood of patients infected with Covid, and much needed oxygen is in limited supply. 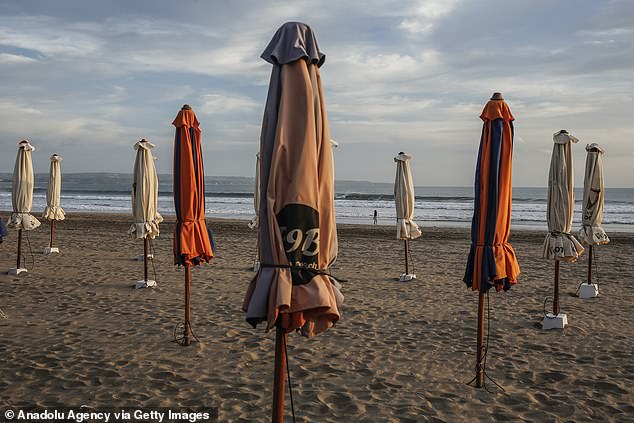 Beaches in Bali are closed due to the pandemic, as Covid threatens to destroy the island paradise (pictured, Seminyak on July 18) 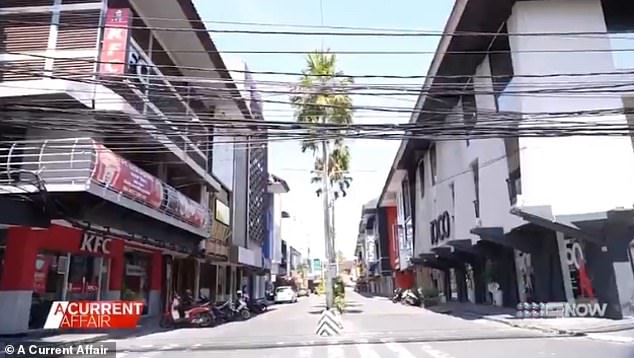 The usually bustling streets in Legian and Kuta (pictured) have become ghost towns, with case numbers and deaths rising daily

Keddell is trying to stay positive, but he admitted life is dire for many locals.

He has also been forced to close his two restaurants for the past 15 months and turn away his 130-strong staff, some of whom can’t afford clothing.

‘Hope seems to be slipping away,’ he told A Current Affair. ‘I’ve lived here for more than 15 years and it’s never been like this.’

Rather than sit on his hands, Keddell has created a cookbook, Our Bali, Your Bali, in a bid to raise money for local charities.

All proceeds from the book have been eagerly accepted, but he knows life needs to improve – and that will start with the return of tourists, whenever that will be.

‘We were hopeful of seeing a travel bubble from Australia,’ Keddell said. ‘But that seems unlikely now which is tough, I know so many Aussies who love coming here for their holidays each year.’ 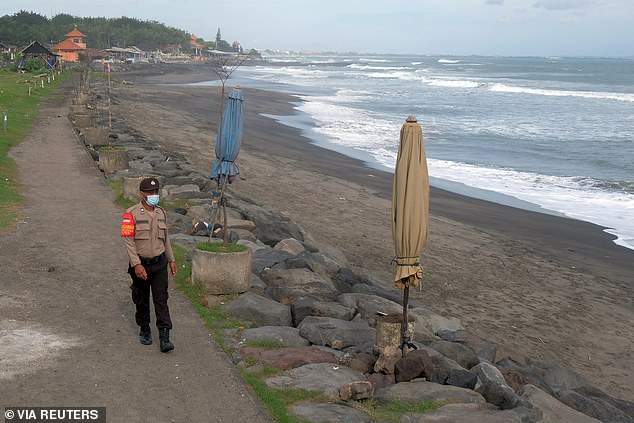 A lone police officer patrols a beach in Badung, Bali, on July 17 (pictured) with tourists locked out of the island since March 2020 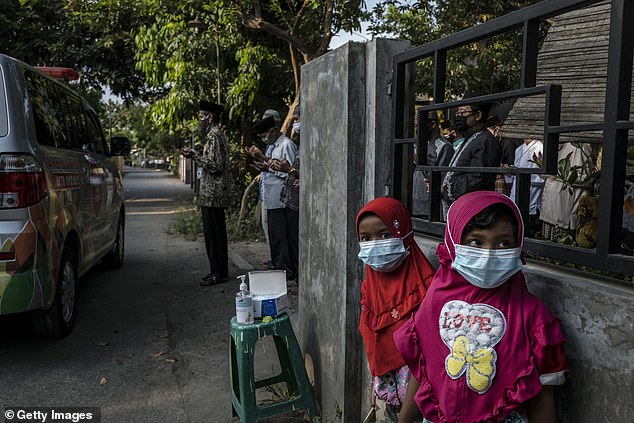 Two Indonesian girls are seen as families pray next to an ambulance in Covid-stricken Yogyakarta, Indonesia (pictured on July 22). The nation has imposed emergency restrictions on 15 locations beyond Java and Bali, aiming to tame the recent Covid-19 surge 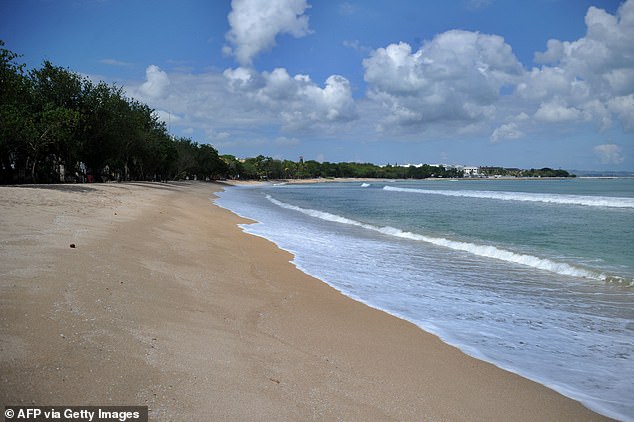 A resident for more than 30 years, the expat said the current state of affairs is ‘by far’ the worst she has seen.

One of the biggest hurdles for the Balinese people to currently overcome is starvation.

‘It’s not only hunger, which is a very serious problem,’ she said.

‘But it’s also the mental health, particularly the men – they are just so desperate that they don’t know what to do and how to look after their families.’

On Tuesday, Indonesia reported a record 2,069 coronavirus deaths in 24 hours as it faces its deadliest Covid-19 surge since the pandemic began.

The country has reported a total of more than 3.2 million cases and 86,835 virus deaths, but those official figures are widely believed to be a severe undercount, due to low testing and tracing rates. 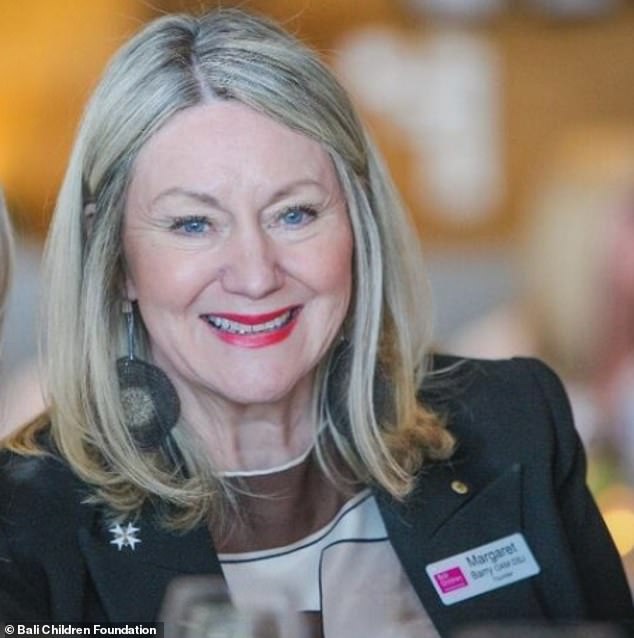 Bali Children Foundation owner Margaret Barry, who has lived on the island paradise for over 30 years, has never seen life as dire as it currently is for countless locals 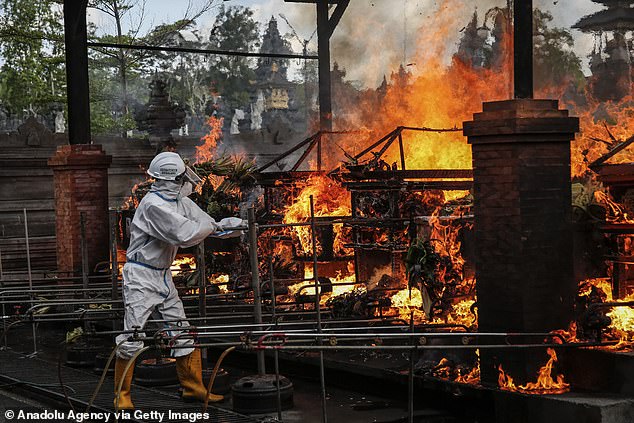 Funeral workers are busy (pictured) with more than 86,000 deaths since the start of the pandemic in 2020

Humanity is suffering from a "broken perception of risk", spurring us into activities and behaviours that cause climate change and a surging number...
Read more

Ramos-Horta Leads in East Timor Election, with Chance of Runoff

Nobel laureate Jose Ramos-Horta secured a commanding lead in East Timor's presidential poll at the weekend with two-thirds of the vote counted, but...
Read more

The Migration Act has become a fest of discrimination, deteriorating rapidly under the Abbott and Morrison Governments.There was a litany of amendments to...
Read more
- Advertisement -