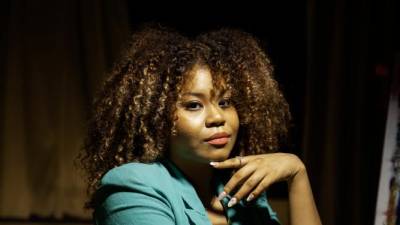 WHAT is not to like about Vanessa Reynauld? She checks all the boxes for stardom – an entertaining personality, relatable content and she has a massive Tik Tok following.

Signing a new recording contract with Sony Music Malaysia comes as no surprise to her fan base and family.

“Things have been great!’’ enthuses the singer, who has just released two singles.

Apart from signing with the label, the social media celebrity has also been receiving many brand deals. It is all in a day’s work for the chanteuse, who has been in the spotlight since she was 12.

With a new sound in the works at her new music haven, Reynauld is looking to further stretch and uncover her capabilities as a musical artiste.

What was the inspiration behind your first solo single Putus?

It was already made. I listened to the demo and I really liked the melody. So, I agreed and went into the studio to record the song. It is safe to say that the song does not reflect my personal life but it basically aims to inspire people out there who are in relationships, to make wise decisions. Whether to work on their relationship or to leave. That is because there is no point in staying in a toxic relationship if you know it is not going to work. So, Putus is basically that and it has a very personal message.

Aside from Putus, you also released Rindu Separuh Nyawa with Naqiu Boboy. How did that collaboration happen?

I got a call from the marketing director of Sony Music one night, proposing that I sing a song with Naqiu. She said I had to record the song within the next two days, and I was quite clueless. I only had two days to learn the melody and understand the song before I had to go to the studio. Although the song did not relate to me, I am happy I had the opportunity to collaborate with Naqiu because he is a very talented and experienced singer. Initially, I admit I was a bit worried that our vocals would not blend but after we finished the song, everything went well. I think this collaboration was a success. I am proud of it!

Do you enjoy singing love songs?

I am drawn to the melody of a song. Since I do not currently write my own songs, I pick songs based on the melody because people tend to listen to the melody. We wanted a song that would stick in the head. Everyone goes through different phases of love in their lives, and it is just a matter of how I deliver the songs that they are able to grasp. I may be lacking in this area because I have not experienced it but I hope I will be able to relate to love songs in the future.

What language are you more comfortable singing in – Bahasa Malaysia, English or Mandarin?

I love singing in Mandarin as it challenges my vocals. This is because when I sing in Mandarin, I have to learn how to improve my vocal dynamics. When I sing English songs, it is usually powerhouse anthems. I have to be more laid back and soft when singing Mandarin songs, and I think they are actually harder to sing. Although it sounds simple to people’s ears, it is actually quite difficult to sing compared to the other two languages. And if things work out in future, I hope I will be able to record some Mandarin songs of my own.

How do you come up with content for Tik Tok?

Original content is quite difficult since you have to invent it from scratch. So, most of my content is usually inspired by the events in my life. If something funny or relatable happens, I would write them down in my notes. Then, I would try to act them out – be it about accents or Asian families. I believe people can relate to content like this as it happens in our daily lives.

Are you working on an album?

I am still scouting for my next single. I do not think it is a suitable time now to release an album.

NOTHING beats the feeling of a newly spruced home environment. The spacious and tidy element can do wonders for our sanity,...
Read more

The power of storytelling

THERE is a sense of social power in storytelling. Or, in other cases, not telling one’s story. “Telling stories is a...
Read more
- Advertisement -