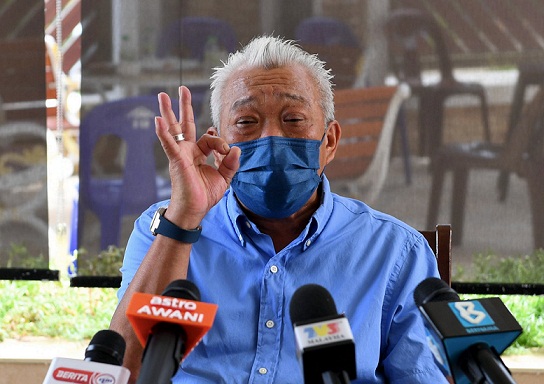 The Deputy Chief Minister questioned the rationale behind the decision to transfer the power from the PWD, which has the technical knowhow and manpower to carry out supervision of state roads to the Finance ministry.

He told reporters on Tuesday that the letter withdrawing and transfering PWD’s power over roads supervision was issued by the Finance Ministry late last month.

“The Works Ministry is the supervising body because PWD is recognised by the government as having the technical knowhow and we have hundreds of engineers to ensure all road works, including Pan Borneo, are surpervised professionally.

“Suddenly we received the letter and I do not know if the Finance Ministry has the engineers who are experts and knowledgable in road matters,” he said and also expressed his dissatisfaction with the Finance Ministry’s action with regards to the awarding of upgrading works on roads under the Municipal Council and District Council (MCDC) to a concessionaire.

According to the Works Minister, there are 21,000km of roads which are under the state government out of which 11,000 km is under PWD while the remainder are under the purview of MCDC.

“If we can achieve 10 per cent every year, we can get 50 per cent sealed roads in 10 years compared to none at the moment,” he said.

Bung Moktar also said that the Finance Ministry’s decision to retain the present road concessionaire meant that his mission to increase the number of paved roads in Sabah will not be achieved.

“I am questioning the Finance Ministry’s action not because I cannot handle the issue of road supervision but because I am of the opinion that this should not have happened.

“Decisions like this needs indepth discussion,” he said and lamented that what had happened made him like a ‘Rubber Stamp’.

Bung Moktar added, “again I am upset not because I cannot handle the issue of road supervision but (what happened) has made me angry and the rakyat are also angry. In fact the matter should be stopped because we need to focus on improving the roads in Sabah, especially roads under MCDC.

“This is the problem we are facing now. I am voicing this out so that the state Finance ministry can see that it is for the benefit of the rakyat in Sabah. We cannot deny the voice of the people because the rakyat will change the government if they are fed up,” warned the Umno Sabah liaison chief.

He said that as the Works Minister, the rakyat will question him about the GRS government’s mission to ensure that roads in Sabah are upgraded.

Meanwhile Bung Moktar claimed that from 2002 to 2020, the government paid RM2.6 billion to the road concessionaire but records in the MARRIS (Malaysian Road Records Information System) data showed that the condition of the MCDC roads has deteriorated badly.

Muhyiddin congratulates PM Anwar, says PN will serve as as check-and-balance in Parliament

The main gate of Istana Negara was closed at 11am.  — Malay Mail photo KUALA LUMPUR (Nov 24): The Malay Rulers today were at...
Read more