Black economy: Profiteering in the pandemic – The Big Story News


On the night of April 26, Aseem Bhatia, a 53-year-old entrepreneur in New Delhi, anxiously awaited the Remdesivir injections required for his 41-year-old Covid-positive sister. Her oxygen saturation levels had dropped below 80 and the doctor had advised that Remdesivir be administered in the next few hours. Bhatia’s team, which had fanned out to drug stores across the city, returned past midnight at 2 am with two doses of the injection (three vials) purchased for Rs 80,000 from a ‘supplier’ they found standing outside a mall in Rohini. But, to his utter shock, Bhatia soon realised that the vials were fake, with even the drug’s name on them misspelt.

“We needed Remdesivir desperately that night. We had checked with every possible chemist and even visited offices of the drug controller—not a single official was available onsite,” recalls Bhatia, who also paid several times the MRP for several other Covid drugs. Bhatia’s sister was admitted to a hospital the next morning where she underwent plasma therapy. She is back home now after what she describes as a “walk through hell”.

The rampaging Covid pandemic exposed the sheer inadequacies in our preparedness and strategy. Hospitals were overwhelmed, crematoriums and burial sites ran out of space, Covid testing struggled to meet the dem­and and the vaccination drive is still at the risk of going off-track. Worse, gaping holes in vital supplies, such as of Covid drugs like Remdesivir and Tocilizumab, oxygen cylinders and oxygen concentrators, have stoked a thriving black market where thousands are forced to pay exorbitant prices for vital medicines and equipment. A pile of of oxygen concentrators in Khan Chacha restaurant

The scale of the crisis has been vivid on social media—desperate hospital administrations in Delhi and other metros taking to Twitter to flag oxygen shortages and harried citizens following leads on Facebook and WhatsApp in their search for plasma, Covid medicines and oxygen cylinders. Medical oxygen that typically costs a few thousand rupees for a 5-10 litre cylinder has sold for as much as Rs 30,000-60,000 to many desperate families. The shortage of oxygen cylinders bumped up the hitherto lean trade in imported oxygen concentrators in cities. With demand far outstripping their availability, black marketeers stepped in.

On April 29, the Delhi police seized 170 oxygen concentrators from a group that was allegedly selling them at inflated prices—as high as Rs 1 lakh. A case was registered under provisions of the Indian Penal Code and the Epidemic Diseases Act, 1897, and four people were arrested. Police raids also reached the doorstep of prominent businessmen. On May 7, the Delhi police said they had seized over 500 oxygen concentrators from three city restaurants owned by entrepreneur Navneet Kalra. The police say Kalra was involved in hoarding and black marketing of these devices that have proved to be life-savers for many Covid patients.

Kalra, whose plea for interim protection from arrest had been rejected by two courts, was arrested on May 16 from Gurugram. Earlier, a metropolitan court in Delhi had made scathing remarks against investigating officials in the case. “You can’t just arrest people because we want to appease the high court. You promulgated the order on May 7 that one cannot sell over MRP. This FIR is of May 5. On that date, there was no crime. There were no regulations,” the court said. “To hide your failure, you are showing that we are arresting people. You’re creating a terror of punishment. That’s not the government’s job. When there is no law, you create the law first.”

Similarly, black marketing of Remdesivir continued even after the National Pharmaceutical Pricing Authority, a central government regulatory agency, announced on April 17 that the prices of seven leading brands of the drug had been slashed (by up to 70 per cent) to make them available for Rs 1,000-2,700 for a 100 mg vial. Cadila Healthcare’s offering, Remdac, is now the cheapest, at Rs 899.

While a debate rages on globally on the tangible benefits of Remdesivir, it remains a part of the treatment for critical Covid patients in India. Manufacturers have been struggling to meet the soaring demand. Cipla, one of India’s largest pharma companies, has a contract to make and supply the US-based firm Gilead’s Remdesivir in over a hundred countries. “Given the unprecedented demand, we have scaled up production of Remdesivir by three times since the first [Covid] wave through our network and partner capacities. The supplies have already started landing in the market,” said a company statement on April 27. Just months ago, Cipla had projected a fall in demand for Remdesivir in keeping with the declining Covid cases. 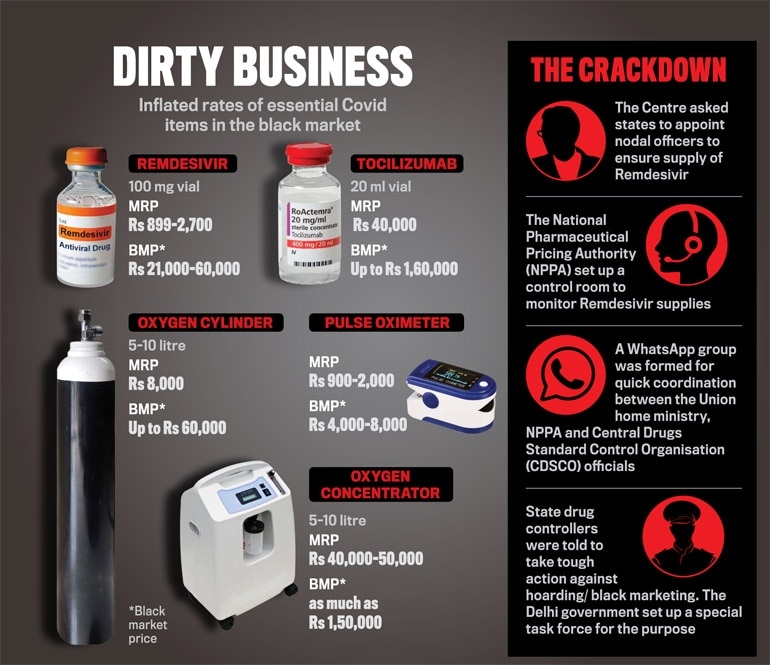 The high demand for Remdesivir has led to gullible customers being scammed. On April 23, Abhishek Jain, a 38-year-old resident of Najafgarh, fell prey to an online fraud while trying to source Remdesivir for his ailing cousin. Jain says he paid one ‘Cipla Foundation Limited’ Rs 20,400 for injections that never arrived. He chased a ‘company representative’ on the phone, but as days went by, his calls started going unanswered. When Jain used a different phone number to book a fresh requirement for Remdesivir, he was given a different account number for making the payment. Jain says he hasn’t heard from the Najafgarh police station on his complaint filed weeks ago. “When I filed the complaint, I was given the contact number of a police officer. When I called up the officer, he claimed he had no clue about the case and that he was on leave for the next few weeks,” says Jain.

In its revised guidelines for home isolation of mild/ asymptomatic Covid patients issued end-April, the Union health ministry has said that Remdesivir should be administered only in a hospital setting. But the shortage of hospital beds for even critical patients has compelled several doctors to prescribe the injection for home use. Often, hospitals themselves have failed to procure the injection for their patients and have asked family members to make arrangements. A senior doctor in the administration of a private hospital chain told india today that on any given day, his hospital (in Haryana) sends 100-150 requests for Remdesivir to the Haryana government, but usually only five or six get approved—thereafter, it’s the patients’ attendants who are asked to get the injections. Officials, though, say the forms are usually not filled in the right format.

The courts have been making stringent remarks on the rampant hoarding and black marketing of Covid essentials. The Delhi High Court said black marketing had left the moral fabric of the people “dismembered” and asked the Centre and the Delhi government to act without waiting to be prodded by the judiciary. The Union government has also been making the right noises. On April 23, Prime Minister Narendra Modi urged state governments to crack down on hoarding and black marketing of Covid-related essential supplies, such as medicines and oxygen cylinders. He reiterated his appeal on May 14 while releasing a fresh instalment of benefits under the PM-Kisan scheme.

The Union home ministry has also been pushing states and Union territories to go after the hoarders. In a communication sent to the state chief secretaries in the first week of April, Union home secretary Ajay Bhalla said state governments may consider invoking provisions of the Essential Commodities Act, 1955, to maintain smooth supply of essential goods. (Offences under this law can invite imprisonment of up to seven years.) States and UTs may also consider detaining offenders under the Prevention of Black Marketing and Maintenance of Supplies of Essential Commodities Act, 1980, Bhalla’s note said.

“Black marketing is a form of economic offence. If linked with the Epidemic Diseases Act, it is treated very severely by Indian courts. Dealing with economic offences should be harsher because they affect more people,” says senior advocate Jaideep Gupta, who was last month appointed amicus curiae by the Supreme Court in a suo motu case on the Covid crisis.

Under the 1980 law on prevention of black marketing, any person disrupting the supply of essential goods faces imprisonment of a maximum period of six months. Last year, the government had included items like masks, sanitisers and medicines in the list of essentials during the pandemic. But laws mean little on the ground if the grey areas are not addressed.

As Supreme Court lawyer Aparna Bhat points out, “Can an individual wanting to help out people with, say, a specific commodity that has been declared ‘essential’ by the authorities be detained? There is no [clear] protocol on how one can be arrested. There is also lack of clarity on what happens to goods confiscated under the black marketing law.”

Gupta adds that under the Essential Commodities Act, imprisonment for hoarding and black marketing ranges from three months to seven years, along with a fine fixed as a percentage of the consignment in question. “Many laws can be pressed into service, but the police have to enforce them. Enforcement remains an issue,” he says.

A GLIMMER OF HOPE

The central government has all along maintained that there is no shortage of Covid drugs and medical oxygen in the country and that efforts continue to be made to keep the supplies smooth. Going by the Union home ministry’s submission in the Supreme Court, as of April 21, the total liquid medical oxygen reserves in storage tanks of the country’s steel plants was more than three times the cumulative demand from 12 states with high Covid caseloads—about 16,000 MT of liquid oxygen was available against a demand of 4,880 MT.

Apart from waiving customs duty and health cess on imported oxygen and related equipment, the government has deployed the Indian Air Force and the Indian Navy to bring in cryogenic oxygen containers from overseas.

On Remdesivir, the government announced in April that production capacity of the seven manufacturers was being nearly doubled, from about 3.9 million vials per month to 7.8 million vials a month. For this, fast-track approvals had been given to six manufacturers to set up seven additional production sites. Additionally, on April 11, Remdesivir API (active pharmaceutical ingredients) and formulation were placed under an export ban to boost domestic availability.

These are undoubtedly welcome moves by the government to streamline essential supplies. But a determined push to end black marketing in Covid goods will also require fixing delivery and distribution problems—particularly in distressed states like Goa and Delhi, where shortage of medical oxygen in hospitals led to a rash of fatalities.

Bringing back the bustard – India Today

The Great Indian Bustard, once a contender for national bird status, is now critically endangered. Can the captive breeding programme in Rajasthan reverse...
Read more

Judiciary vs executive | The collegium clash

Should a judge be picked by his peers or should the executive have a say in the matter? A bitter battle has broken...
Read more