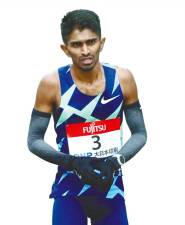 Prabudass Krishnan was unable to log in enough training hours for an international marathon, due to a viral fever infection, just weeks before the event.

But the national runner rose above the challenges and broke his own half marathon national record at the Hokkaido-Sapporo Marathon Festival 2021 in Japan on May 5.

Prabudass finished in 1 hour and 7 minutes – 29 seconds faster compared to his previous record.

“I did not have much expectation for this as I only had 10 days to prepare, a very short period of time.”

I thought I would just do my best and gain experience,” said Prabudass.

“I was preparing for the competition when I got admitted to the hospital,” said the 30-year-old.

Initially, it was suspected to be dengue as the symptoms were similar. However, further checks revealed it was a bacterial infection.

“It got worse, on the same day. My lymph notes got swollen and I had a rash on my body,” said Prabudass, who continued to face setbacks even at the competition.

He felt that the Sapporo weather was very challenging.

The national athlete believes that talent is nothing without hard work to conquer the challenges that come with the position.

“As an athlete, one needs to learn to handle constant pressure and perform at the highest level,” he said.

A runner constantly travels for training and competitions and that means being away from family, most of the time.

“Sometimes, funding is a big issue because athletes don’t have sufficient funds to cover the expenses for competitions and training, held overseas. They need sponsors,” said Prabudass.

“It is also important to strike a good balance between work and sports career. It’s the biggest challenge for any athlete,” said the physical training instructor of lance corporal rank in the Royal Malaysian Navy.

The Covid- 19 pandemic and movement control order (MCO) have also had an impact on Prabudass, who could not train with his team.

“I cannot travel to see my coach and get advice. It’s hard as he cannot see my progress,” said Prabudass, whose daily exercise routine includes training twice a day, running for 20 to 30 km.

Besides, parks and stadiums are also closed for practice and he has to find a place to train.

Currently, Prabudass is in quarantine for 14 days. He was supposed to train for KL Open and Malaysia Open in May.

He is unsure if these will now take place.

He has to participate in such competitions in order to qualify for SEA Games.

However, such runs are being canceled due to the pandemic.

“Sometimes, it is a bit challenging and stressful. We will train very hard and then, suddenly it will be postponed or cancelled.

“We do not know when will be the next competition but we need to train and to maintain our fitness,” he said.

Prabudass says: “My goal is to keep working hard and improving my personal best (finishing time record). Focus on breaking the records in long distance running and at the same time, inspire others.”