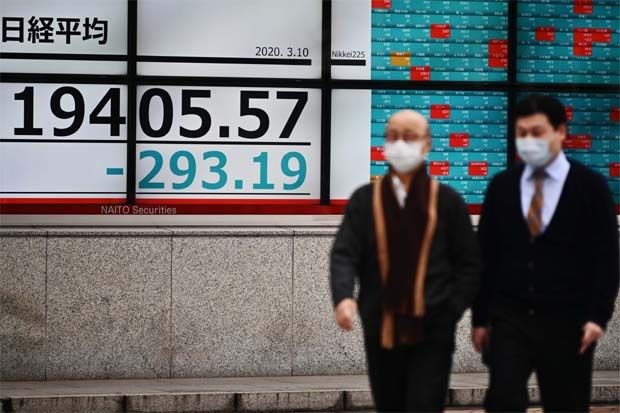 SYDNEY: Asian shares slipped to seven-week lows on Thursday after a dismaying rise in U.S. inflation bludgeoned Wall Street and sent bond yields surging on worries the Federal Reserve might have to move early on tightening.

MSCI’s broadest index of Asia-Pacific shares outside Japan lost 0.6%, though trade was thinned by holidays in a number of countries.

Asian markets were already on the backfoot this week amid inflation worries and a tech sell-off on Wall Street, and nerves were further jangled on Wednesday when Taiwan stocks tumbled on fears the island could face a partial lockdown amid an outbreak of the virus.

Wall Street was blindsided when data showed U.S. consumer prices jumped by the most in nearly 12 years in April as booming demand amid a reopening economy met supply constraints at home and abroad.

The jump was largely due to outsized increases in airfares, used cars and lodging costs, which were all driven by the pandemic and likely transitory.

Fed officials were quick to play down the impact of one month’s numbers, with vice chair Richard Clarida saying stimulus would still be needed for “some time”.

“It likely would take a very strong May jobs report, with sizable upward revisions to March and especially April, to get the Fed to start a discussion about tapering at its June meeting,” said JPMorgan economist Michael S. Hanson.

“We continue to expect the Fed to begin scaling back its pace of asset purchases early next year.”

Investors reacted by pricing in an 80% chance of a Fed rate hike as early as December next year.

That was a shot in the arm for the dollar, which had been buckling under the weight of rapidly expanding U.S. budget and trade deficits. The euro retreated to $1.2082, leaving behind a 10-week peak at $1.2180.

In the crypto currency space, Bitcoin steadied after sliding more than 10% when Elon Musk tweeted that Tesla Inc has suspended the use of bitcoin to purchase its vehicles.

The rise in yields and the dollar pressured gold, which was left at $1,819 an ounce and off a multiple-top around $1,845.

Public Bank to raise base rates by 0.25% effective from Friday