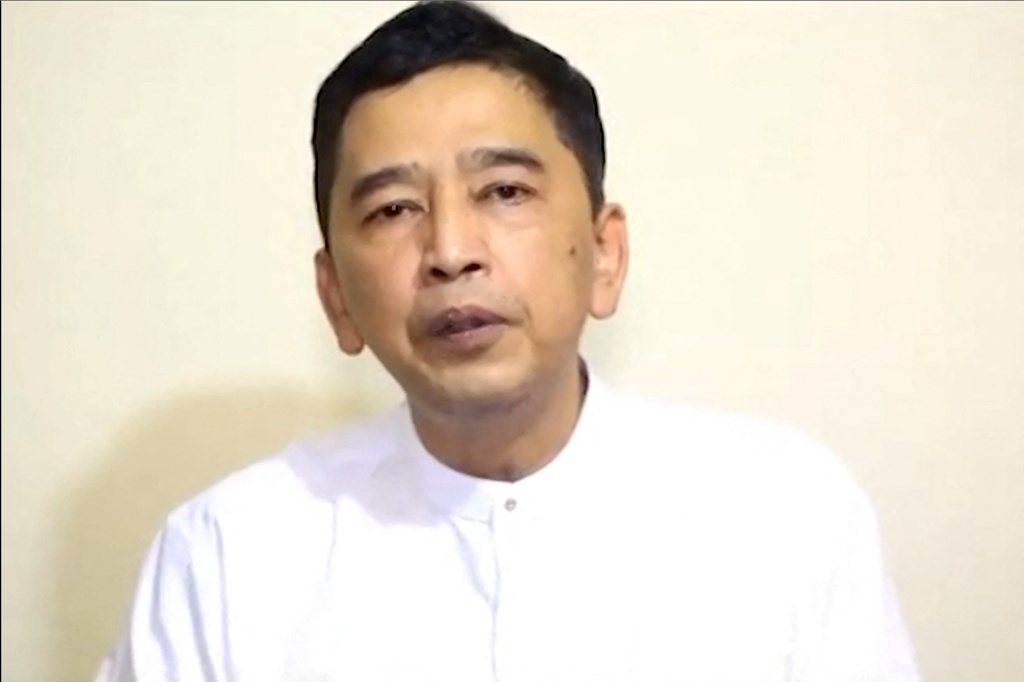 This screengrab from a video released by the Committee for Representing Pyidaungsu Hluttaw (CRPH) on April 16, 2021 shows Min Ko Naing, prominent pro-democracy leader and member of the CRPH, a group of MPs from detained Myanmar civilian leader Aung San Suu Kyi’s National League for Democracy (NLD) party, in an undisclosed location as he announces the formation of a National Unity Government including different ethnic groups, amid a crackdown on protests against the military coup. — AFP photo

The country has been in turmoil since the military detained Suu Kyi and seized power, triggering a massive uprising that the junta has sought to quell with lethal force.

Besides demanding a return to democracy, protesters are also increasingly calling for more of a governing role for the country’s minority groups — which have long seen their voices marginalised by the ethnic Bamar majority.

The Committee Representing Pyidaungsu Hluttaw (CRPH) — a group of lawmakers mostly from Suu Kyi’s party attempting to govern underground via a shadow parliament — on Friday announced its leaders.

Helming the so-called “National Unity Government” is Suu Kyi, in her position as state counsellor, and President Win Myint. Both are under house arrest and facing a barrage of charges from the junta.

They are flanked by a vice president who is ethnic Kachin and a prime minister who is ethnic Karen, said Min Ko Naing, a prominent democracy leader, in an address on the CRPH’s official Facebook page.

“We have organized a government which has the largest number of ethnic minority groups,” he said.

While Myanmar has more than 130 official ethnic minority groups, the country’s political fate has long been tightly controlled by the Bamar majority — first under a nearly five-decade junta regime which forced a so-called “Bamarisation” on minorities; and then under Suu Kyi’s administration.

They were chosen based on results from the 2020 election, input from a nationwide anti-coup protest movement, and ethnic minority groups — including armed rebels in the country’s border territories, said Min Ko Naing.

“We have to pull it from the root… we must try to eradicate it,” he said, referring to the junta as he raised a three-finger salute — the symbol of resistance.

“Only the people can decide the future.”

The junta has said anyone working with the CRPH is committing “high treason”, and has announced arrest warrants for hundreds of prominent activists and politicians — some of whom now hold positions in the new “National Unity Government”.

More than 720 people have been killed in unrest since the coup, according to a local monitoring group, while more than 3,100 are behind bars.

The latest detention came Thursday of prominent protest leader Wai Moe Naing, who was arrested after a car rammed into his motorcycle as he was leading a strike through Monywa city, according to AFP-verified footage.

The violence has raised alarm among the international community, with the European Union set to impose more sanctions next week to raise pressure on the junta.

In central Myingyan town, which has seen numerous bloody crackdowns against protesters since the coup, residents raised a black flag on Thursday — a signal that they would defend their areas from police and soldiers.

Overnight, two men were killed in a clash with security forces, said a Myingyan resident Saturday.

“We went to their temporary bases to attack them with homemade bombs and guns, the resident said.

The sight of a black flag whipping on a pole has become increasingly common since the junta started deploying live ammunition against protesters in mid-March — with appearances first in Yangon’s hotspots of unrest.

“The black flag is a warning sign (of) defiance… the brutalities over peaceful protesters have pushed civilians to defend themselves with anything they have,” prominent activist Thinzar Shunlei Yi told AFP.

A regional summit over Myanmar’s ongoing crisis is expected to convene this month for the 10-country bloc of the Association of Southeast Asian Nations (ASEAN).

Cambodian premier Hun Sen announced Friday he would travel to Jakarta for a “special ASEAN meeting” on April 24.