In Turkey, 14 February Valentine’s day excitement was experienced in PUBG Mobile, which is the most popular mobile Battle Royale game worldwide, and the number of active players per day is millions. In the PUBG Mobile universe, players have enjoyed unabated competition, as well as special days with new in-game updates and fun events. Thanks to various events in preparation for Valentine’s day on February 14, players continued their adventures unabated in a loving atmosphere, as well as partnering with the fun in the special PUBG Mobile “Yaparsın Aşkım” content on Valentine’s day. 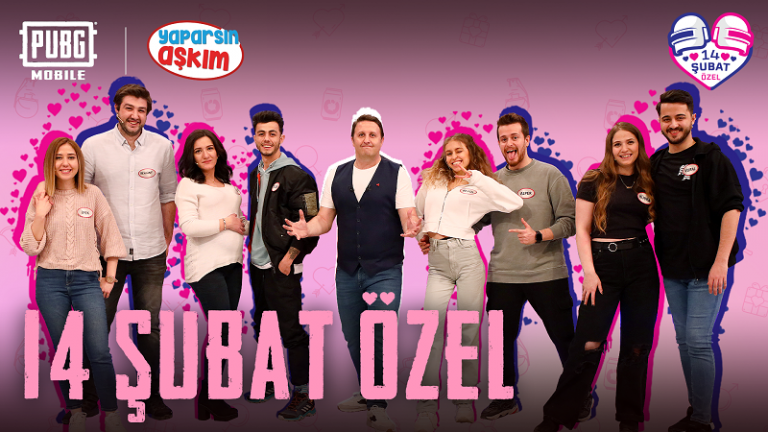 PUBG Mobile also prepared a surprise event for its players in Turkey, as well as an in-game event that it brought special to Valentine’s day on February 14. Favorite names and their wives took part in this surprise event, where players will share fun and fun minutes from each other. With the presentation of İlker Ayrık, the couples Kübra & Vural Üzül, Nilay & Tugay Gök, İpek İnan & Berkant Cen and Betül Çakmak & Alper Rende were present at PUBG Mobile Valentines Day Special Event “Yaparsın Aşkım.” Along with this event, the new in-game update, the Love Island atmosphere, was moved in front of the cameras. In the studio, designed entirely for PUBG Mobile, the loved ones entered a sweet competition in the parkour, where the most familiar details of the game are also present. From PUBG Mobile pan to drop and straw, which has made its reputation all over the world, PUBG Mobile has carried the mood of Love Island to the studio for couples in the studio. At the same time, the couple Kübra & Vural Üzül introduced the details of the in-game update to the audience by touring the Love Island in the studio. The couples tried to earn points not only in the parkour games in the studio, but also in the in-game competitions prepared for PUBG Mobile. While Kübra & Vural Üzül couple became the first finalists in the competition, the first couple to be eliminated was İpek İnan & Berkant Cen couple. Kübra & Vural Üzül couple was the winner of the sweet competition that continued on fun parkours!

On February 14 Valentine’s day, the contest, which was broadcast via PUBG Mobile Turkey Youtube channel, attracted great attention in Turkey. The contest, which watched by 55000 people in the first day, took the first place in the trends in Youtube Turkey after 24 hours. The competition video passed 1 million views on day 2. PUBG Mobile, which has millions of active players worldwide, has a new in-game update for Valentine’s day on February 14. Players enjoyed a fun atmosphere while beating their opponents with these new content. Designed to increase Inter-player interaction, the new Love Island has already received attention from players with different details. The update, which runs until February 19, features heart balloons on Love Island, a photo corner where players can pose in fun poses with their teammates and a tree swing. In addition to these beautiful decorations, players can write letters to each other during Valentine’s Day events. This updates, fun Love Island update brought a new experience to the players and also inspired the special Valentine’s Day PUBG Mobile “Yaparsın Aşkım” content.

We carried out a PR study within the scope of our cooperation with Intel University Esports, which is a part of the esports...
Read more
- Advertisement -