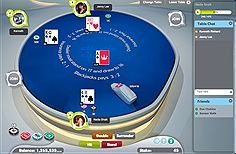 Operating at launch as a play-for-fun site, Yazino will add new games with multiplayer content on an ongoing basis and a play-for-money capability within the next year. The featured tournaments and engaging game play, skill levels and achievements, will allow Yazino to define the next generation of online gambling.

“Online gaming sites fall into one of two camps: gambling or social gaming. Gambling sites are perceived as dark and seedy, while social gaming sites are seen as fun, friendly and engaging. Our ambition is to connect the two, bringing simplicity and friendliness to the gaming market, along with a social networking experience that sets us apart from the rest,” said Hussein Chahine, Yazino’s Founder and CEO.

“We’ve approached this through the casino environment, which we believe embodies the best aspects of gaming, gathering friends around a table in a competitive and fun environment.”

The official launch comes after Yazino has already registered more than 200,000 players, with more than 10,000 new unique players joining daily. The objective is to grow traffic to at least one million registered players and 100,000 unique daily players by the end of 2010.

“We want our players to be able to compete with each other in a friendly environment, where they can create their own tables, invite their friends, chat, or simply compete against a network of like-minded new friends. We acknowledge the positive power of friendly competition, which is the essence of all our games. Yazino’s brand is fun and social to its very core,” commented Chahine.

With backgrounds in technology and a passion for innovation, the site’s founders built Yazino’s Strata platform from the ground up. Everything is completed in-house, from game development, technical backend through to the front-end website visuals. At a glance, Yazino looks like a social gaming site yet underneath it is powered by an intricate machine wired for gambling.

“This company has been entirely financed by its founders and friends, from start-up into its growth phase. There are no limits to our aspiration to translate the core of our brand into everything we do, including the financing of the company,” said Bijan Khezri, Co-Founder and Executive Chairman.

Yazino aims to bring a fresh approach to the online casino world, one that is fun, inviting, and socially connected.

Hussein Chahine, Founder and Chief Executive Officer
Hussein is the driving force behind Yazino. He holds a degree in Mathematics and Computing from Kingston University. He has always been passionate about IT and innovation. In 2004, he founded Signature Technologies, a UK company that delivers bespoke IT solutions for online betting and payment systems. His clients have been industry leaders such as AbsolutePoker and Stan James. It is this previous insight into the gaming and betting industry that gave Hussein the inspiration for a new generation of casino gaming and led him to found Yazino.

Bijan Khezri, Co-Founder and Executive Chairman
Bijan is Executive Chairman of Yazino Group AG, Switzerland.  Since 2008 he has also been Chairman of Stan James Plc, one of Europe’s leading sports bookmakers. After studying law at the University of Bonn and graduating from the Institute de Hautes Etudes Internationales (University of Geneva), Bijan built the technology practice within the Equity Capital Markets Group of Paribas in London. Since 1998 he has invested as chairman, chief executive and non-executive director in innovation-centric companies, both publicly traded and private, in the UK, the US and Germany. He is co-founder and partner of Saphire Finance LLP, a London-based corporate finance partnership authorized and regulated by the UK Financial Services Authority.

Guillaume Sampic, Marketing Director
After studying economy and finance at university and graduating from the HEC-ESSEC-Paris X Doctoral School, Guillaume started his career in the video game industry as Country Manager for Disney Interactive. He then joined a fast growing internet start-up, Maximiles, in the early 2000s, before launching the French subsidiary of the leading European matchmaking service PARSHIP and running, as Chief Operating Officer, two leading internet companies in their respective markets. Until recently he has been a consultant to different Internet companies, including one of the top three online poker sites in France.

About Yazino
Yazino, the world’s first social casino (http://www.yazino.com/) was conceived by three friends who wanted to reinvent the social gaming and online casino worlds by connecting the two together.

Yazino has built a bridge between traditional online gambling and social gaming sites, creating a whole new hybrid category. The entire brand and in-game experience is entertaining and social to its core.

Yazino offers a uniquely fun and competitive environment to connect the world around casino games, such as Blackjack, Roulette, Texas Hold’em and Slots.  Constantly refreshed multiplayer content, tournaments and the engaging challenge of levels and achievements allow Yazino to define the next generation of online gambling.

We want our players to be able to compete with each other in a friendly environment where they can create their own tables, invite their friends, chat, play against each other or simply compete against a network of like-minded new friends. We want all of this on a site without a house distorting the game experience.

Yazino was founded by Hussein Chahine, Bijan Khezri and Gojko Adzic in 2008.

Superheroes have grown from being simple characters into becoming a fully fledged franchise. The Marvel Superhero action figures are now branching out beyond...
Read more

Consumers can win a day as a professional AC Milan player at the MilanelloVienna, 01 March, 2010 - bwin is launching an extensive...
Read more

The Most Thrilling Poker Tournament of the Year - £222,000 Poker pro, Roland De Wolfe walked away with £77,700 and a standing ovation at...
Read more
- Advertisement -